Keybase is now supported by the Stellar Development Foundation 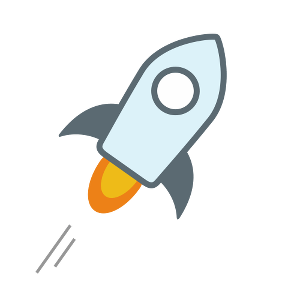 Later this year we will release something big involving Stellar. Hint: it'll be great for Keybase users and Stellar usability.

I'll divide this post into two halves: (1) why we like Stellar, and (2) a summary of what's next.

Stellar combines all of the following traits:

A transaction in Stellar costs a tiny fraction of a penny, and it will scale to far more transactions than Bitcoin. With Stellar, you can send someone $1.00 or $0.25 or even $0.01. Let's not forget the micropayments dream.

As I'm writing this, the average ledger time on Stellar is 4.74 seconds. And Stellar's lightning network will launch this year.

3. Stellar is not bad for the environment

We are disturbed by Bitcoin's energy consumption. BTC alone is consuming as much electricity as all of (update: Austria), and roughly (1/300th) of all the electricity in the world. 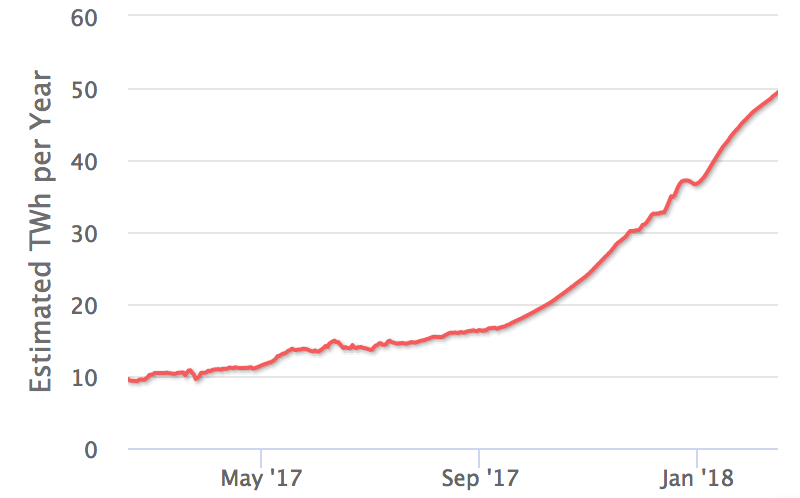 The above graph shows it has climbed 400% in just 12 months. At this rate, Bitcoin will soon use more electricity than the entire United States of America.

I suspect this is an overestimate, but the trend is terrifying.

It's very likely the world is at great risk right now, and as cryptocurrency scales, the share of blame it shoulders for climate change will scale, too. You should fear a backlash. There may be social and legal opposition to any cryptocurrencies which haven't switched away from proof-of-work.

And traditional banking, with its branches and offices and free dog treats, uses even more electricity than Bitcoin.

Stellar does not burn electricity just to form consensus. It has no proof-of-work component.

4. Other projects are jumping on board

Many other projects are jumping on, either by having ICOs on Stellar or by tokenizing real-world assets like carbon credits or gold.

Most recently, a team including Moxie Marlinspike (of Signal) announced MobileCoin, to run on Stellar's protocol. And Kik is switching from Ethereum to the Stellar Network.

ICO's have begun switching because Ethereum and its scripting are "too expensive and too insecure." [link]

And the CEO of Kik said: "We've been using Ethereum to date, and to be honest I call it the dial-up era of blockchain."

Beyond Lumens, your Stellar wallet can hold a currency you like (dollars, euros, litecoin), issued by "anchors" you choose to trust. You can think of them as cryptocurrency-tracked IOU's. And you can trade them.

In the future, I may hold Bank of America USD, and redeem them at Bank of America. But perhaps you think BoA is a POS, and you only trust Chase USD. If I send you my dollars, the Stellar network finds the cheapest, fastest conversion into a dollar you trust. This isn't a smart contract you write or paste in. It's built into the network.

Similarly, I could send my dollars to a friend in Germany, and they would arrive as euros. On Stellar, this would be an atomic transaction. No one would get stuck with a currency or issuer they didn't trust.

6. The network implements a decentralized exchange

Stellar's network understands limit orders, which means Stellar itself acts as an exchange. This model powers the above-mentioned atomic payments. Even more impressive: it lets traders trade without exposing their private keys to someone else.

Stellar is not a pending white paper or future project. All the above features are live. And Lumens are actively traded on exchanges in very high volumes.

8. We have a history with its chief scientist, David Mazières

A big part of our own professional opinion comes from the team.

Search that page to see that he has co-authored:

In other words, Keybase and Stellar have a history of working together.

Part 2: What is next

Keybase will continue to build out all its existing features. We will add polish, performance, bug-fixes, and enhancements to:

We will also focus on some things we've been ignoring:

All while integrating certain Stellar features directly into Keybase's apps.

Specifically, here's a list of payments problems we want to tackle:

If these problems sound familiar, it's because they're the exact problems we've been working on for the last 3 years.

And we'll be expanding the team to do it. So yes, we are hiring. More than ever, in fact.

Very happy with this partnership,

Yup, as stated above! We are looking for engineers and designers.

Where can I talk about this?

There is now an open stellar team on Keybase. Anyone can join the team to discuss Stellar, Stellar+Keybase, etc.

Does Keybase itself have Lumens?

Thus far, SDF has supported us with cash — "dirty fiat" — which is what it takes to build software. But yes, we will hold Lumens later.

But Stellar is not Turing complete

Hodl on a second - aren't these anchored currencies the same thing as "tethers" (USDT)? I hear bad things about them.

Sort of. How Stellar's view of real-world currencies is different:

This is very different from being stuck in a centralized exchange with one questionable currency-pegged token.

What about Keybase profiles' support of Bitcoin and Zcash addresses?

This won't change. We continue to be big fans of Zcash (for all the reasons mentioned here), Ethereum (for its flexibility), and Bitcoin (for its relative stability). We're also excited for Filecoin.

We really are pro cryptocurrency across the board.

Where can I learn about Stellar?

Here's a Talk at Google about it. After the video, you could read the Stellar Consensus Protocol paper. And here's their blog post announcing their support of us.

Won't this distract the Keybase team from its other work?

All of our existing product (chat, teams, files, identity, etc.) should only get better, with more total resources put into them.

So are you launching a coin, like MobileCoin or Kik's?

No. We will be helping Stellar in general, not launching our own coin.

Have you ever heard of the Dutch tulip craze?

It sounds familiar. Have you ever heard of proof by example?

Any advice on storing cryptocurrency today?