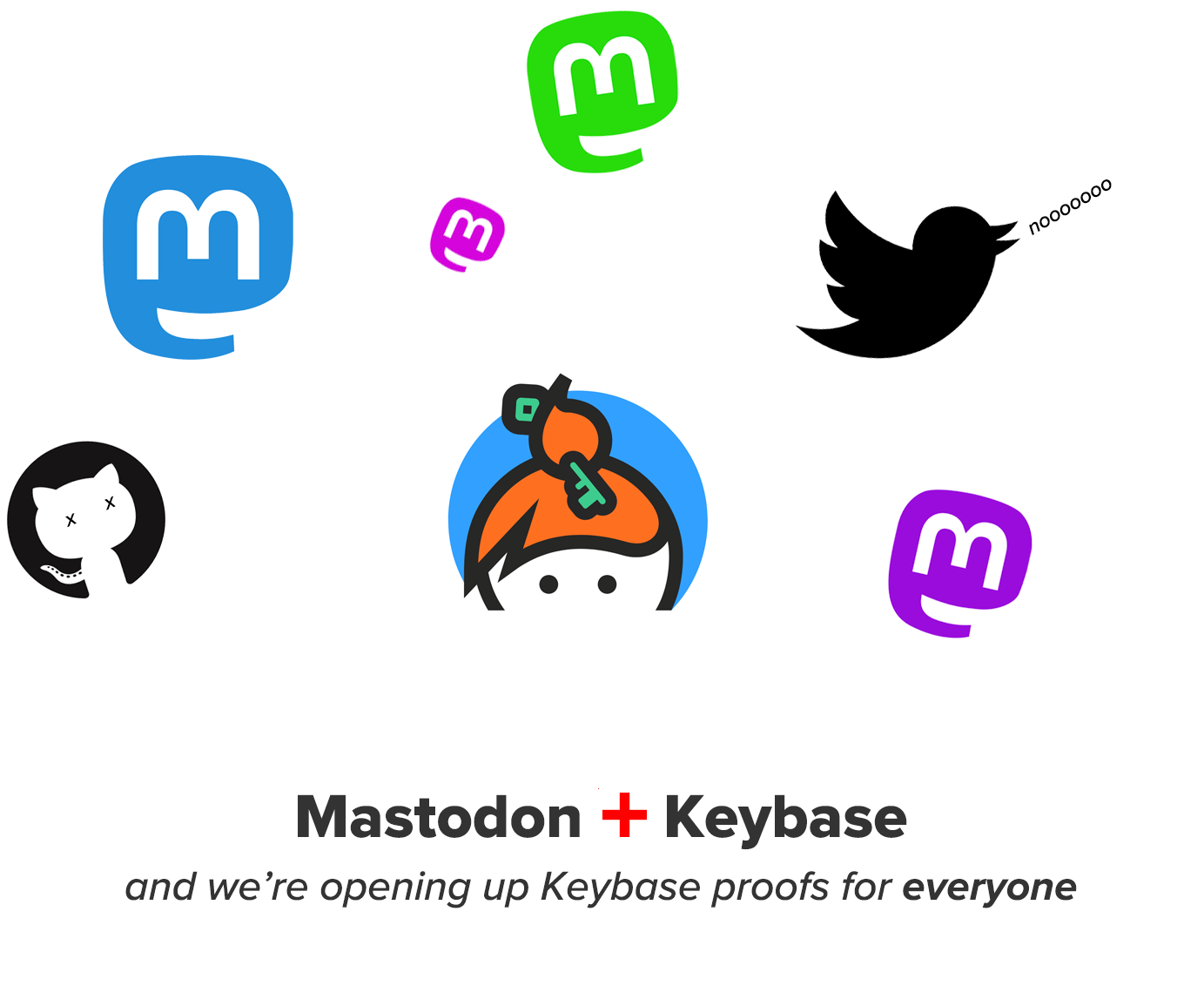 Today we're announcing that Keybase has a new, open proof protocol, and we've kicked it off with the Mastodon Fediverse. Already, 31 communities are live (mastodon.social, witches.live, aus.social, etc.), with many more in the coming days.

Everyone from a small phpBB forum to a big site such as Etsy, GitLab, or StackOverflow is welcome to do this easy integration.

First, what is Mastodon?

Mastodon is a microblogging social network. It's like Twitter, except anyone can administer an "instance," on a domain of their choice, letting in whatever members they want.

It's pretty slick, and it honors the original spirit of the Internet.

Keybase is a secure (as in cryptography) app for groups, communities, families, and friends. At its core is identity. Keybase is a catalog of connected identities and keys. For example, here's my friend tammy : 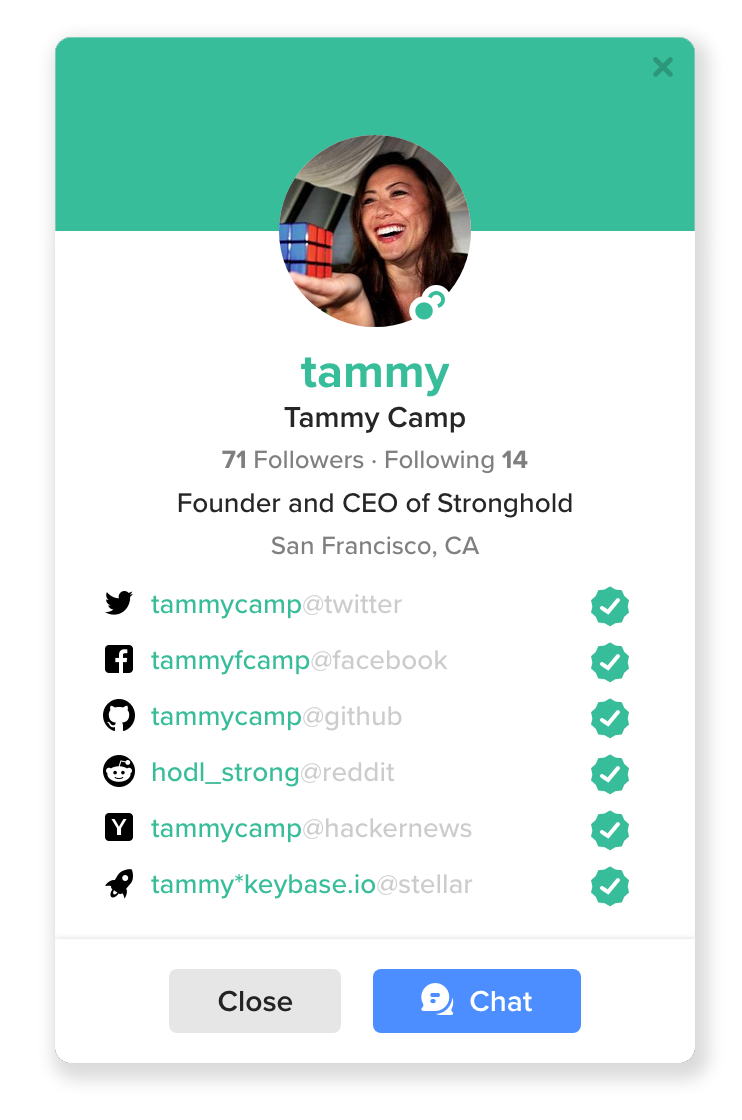 I know her as @tammycamp on Twitter, and Keybase teaches me she's also u/hodl_strong on Reddit. Further, Keybase lets me have an encrypted chat with her, or add her to a group I'm building. I can feel safe I'm talking to the right person.

An example of our old way of doing things

Let's walk through one. In our scenario, Keybase user haraldbluetooth wants to prove he is @toothyharald on Twitter.

After typing his Twitter handle into the Keybase app, Harald goes through these screens: 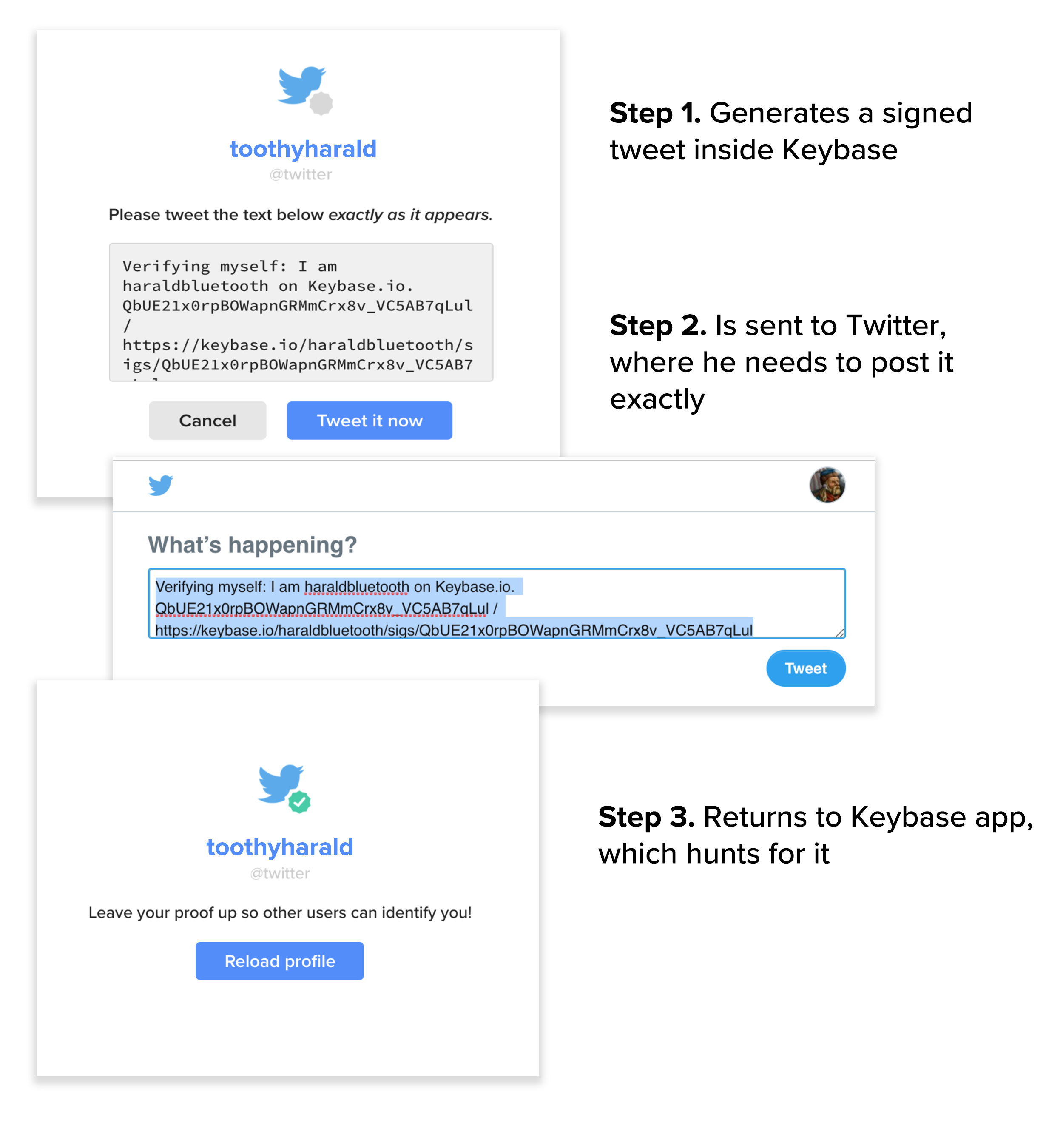 Problems with the old way

Still, we think this flow is choppy. Harald's Keybase app can tell him exactly what to tweet, but once he's in Twitter, Keybase is just sitting around, hoping he didn't change anything before posting.

Mastodon has done all this right, starting in Mastodon version 2.8. And now anyone else can, too.

Here’s what the proof flow looks like for Mastodon. When haraldbluetooth claims in Keybase that he's allmyteeth on mastodon.social, he lands on a mastodon.social page: 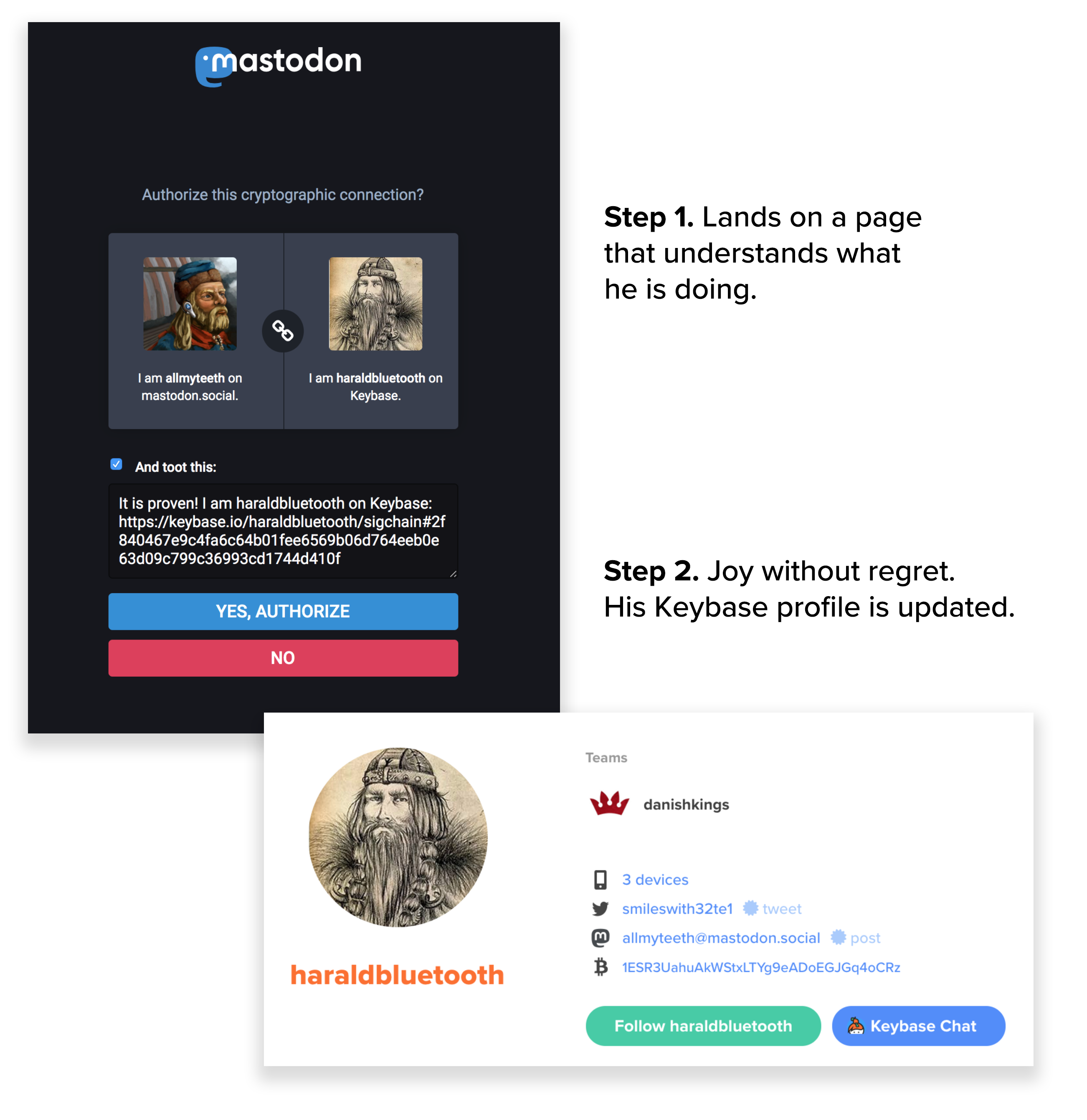 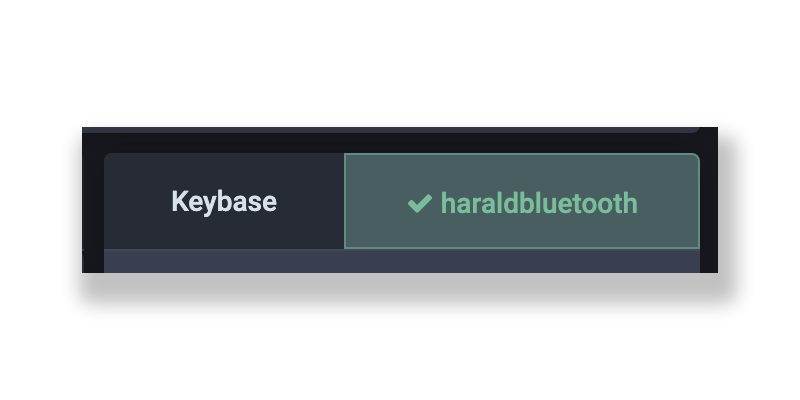 Source: his profile on mastodon.social
Corroborating: his sigchain link on Keybase

This, unlike a Tweet or Toot that could say anything, only shows up on his Mastodon page if it's legit.

FINAL RESULT: if you know Harald on Mastodon, you can end up with his keys! Or if you know him on Keybase or elsewhere, Keybase teaches you about his Mastodon identity. All cryptographically verifiable.

You can send encrypted messages from the command line, using these proofs.

Or, using the Keybase chat API

Your Keybase app will verify all the crypto, and the chat will appear: 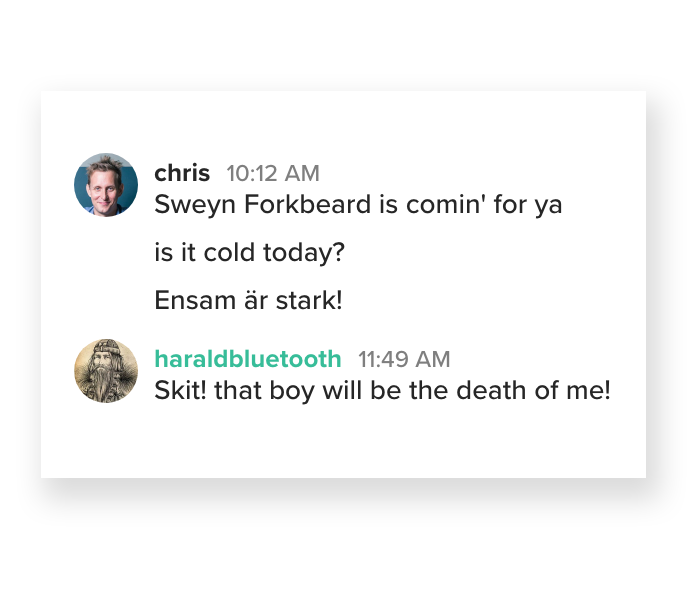 What the Mastodon project had to do

It wasn't a large project. They had to create or update a couple JSON endpoints, a config file, and an extra screen to handle this proof connection. Any site can do it.

Keybase profiles - in both the app and website - now link to Mastodon.

That's it. If your team builds a site or app with members, go for it. If you use an app or website you'd like to see connected to Keybase, you can send them this page.

I'm on a team that's interested. How do we get our project connected to Keybase?

Here's our integration guide. It's still a bit rough around the edges, but it should only take a day or two of programming to get your side done.

I run an Mastodon instance. Am I already added?

Perhaps. Many instances are in listed in the Keybase app but we have paused adding new instances for now. If you are looking to prove your identity on a personal instance then an https proof of the domain should do the trick, proving that you own that instance.

I REALLY want the admins of Site X to integrate with Keybase.

What are your hopes and dreams?

We would love to connect Keybase to any forum and messageboard software, GitLab, NPM, Ruby Gems, other code publishers, and even LinkedIn.

Over the years, people have asked us for various integrations in this ticket. If you know anyone on any of those teams, it's now in their hands...we'll be standing by to help out.

I think you should do this slightly differently.

Please let us know. We can expand and improve this.

Because our users requested it in force. And because we feel like there are shared values here. And because they were willing, helpful partners (thanks @gargron).

Are there sites you won't link to?

Like a Mastodon instance, we reserve the right to work with whichever partners we prefer. We specifically will avoid at least these sites:

this answer updated, to address some confusion!

One idea we had: instance owners might like to invite their own users to a secure group (or chat) with each other. We're thinking about a tool that will let a site admin cryptographically group people together.

For example, let's say you run SuperMotorCycleForums.org. You'd like realtime, encrypted chat for your members. You could have your users connect their Keybase account and automatically jump into your team's encrypted chat (technically YOU would be adding them), and they'd get access to your team's encrypted files. You could even have cryptographically partitioned subteams. Say, "admins" on your site get into a special encrypted team on Keybase.

This tool wouldn't be introducing anything new; obviously you know who your Keybase connected users are already. And you have the ability to invite them into a team. It would just make it easier.

Our first attempt to explain this made some people assume Keybase (the server code) had the power to control team memberships on Keybase. We just can't do that, as our Keybase app would never accept that. Once a team is created, its role changes must be signed by its admins.

If you run a larger community or site and are interested in talking about this feature, reach out to chris on Keybase. We could prioritize this tool.