The Keybase app is getting amazing. It now has everything from an encrypted, free team chat to honest coin flipping. All while becoming more and more usable.

In our pursuit of team collaboration, we've ignored cryptography's core tools. For example, signing a message, and then exporting it, hasn't been possible. The same for encrypting. There has been no way to compose something, transform it, and then paste it into another app or website. 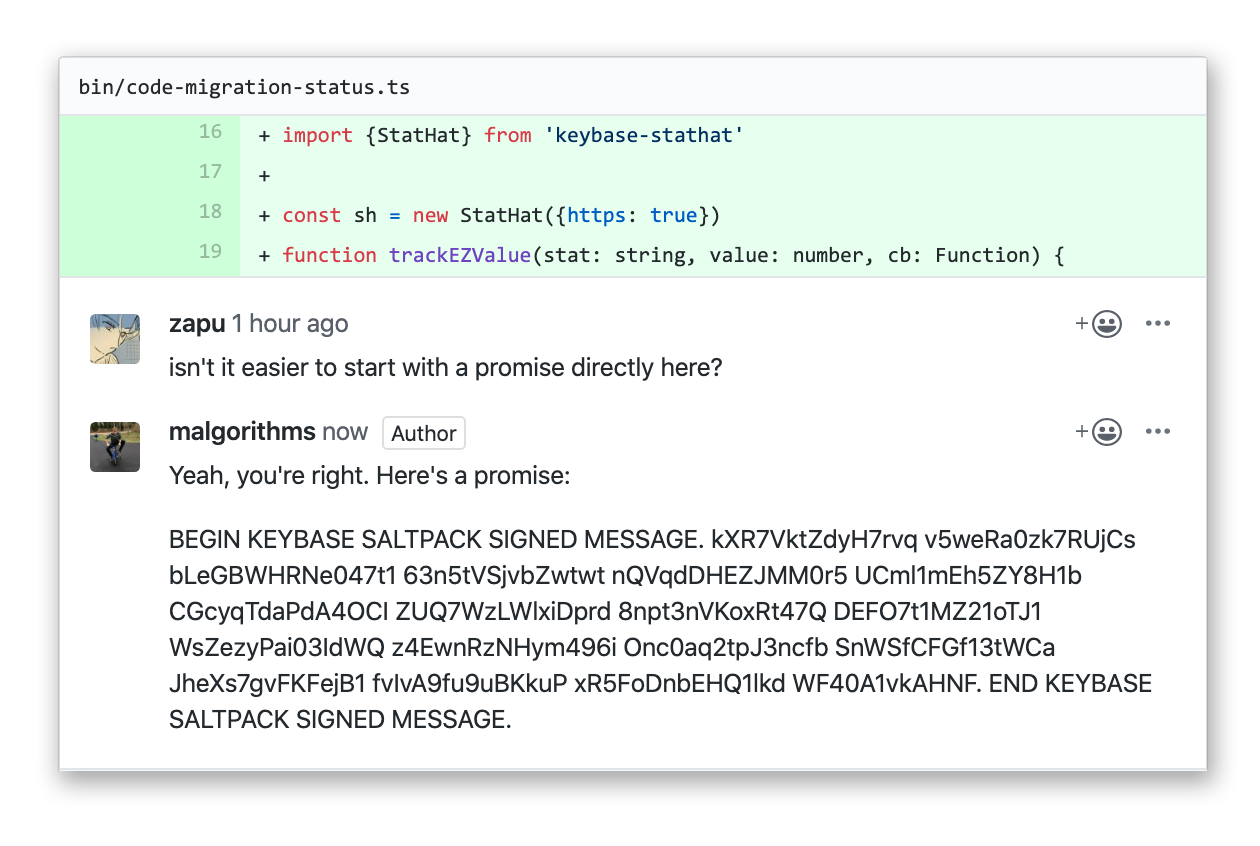 Or these encrypted files I put on a disk: 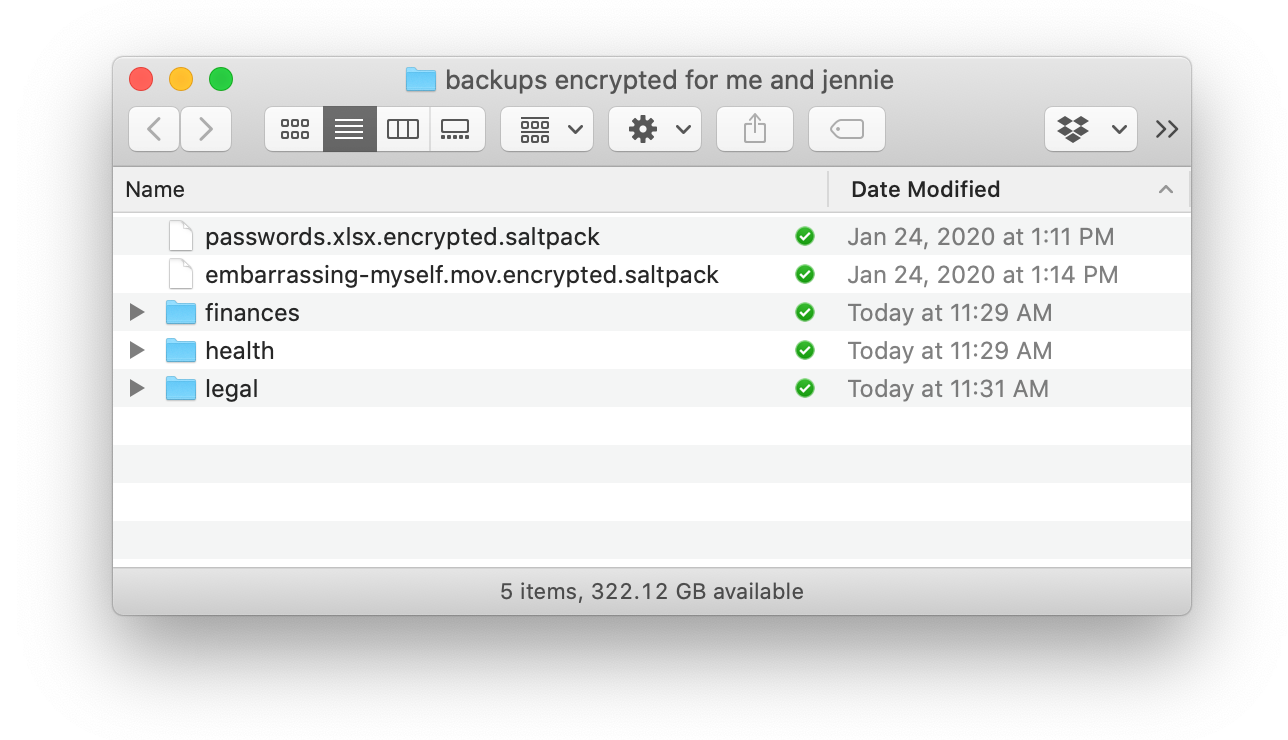 Well, good news: it's working now. Starting this week, Keybase users can encrypt, decrypt, sign, and verify any text or file, and store or post the output anywhere on the Internet...or in a closet.

Here is a screen grab of my signing a message. 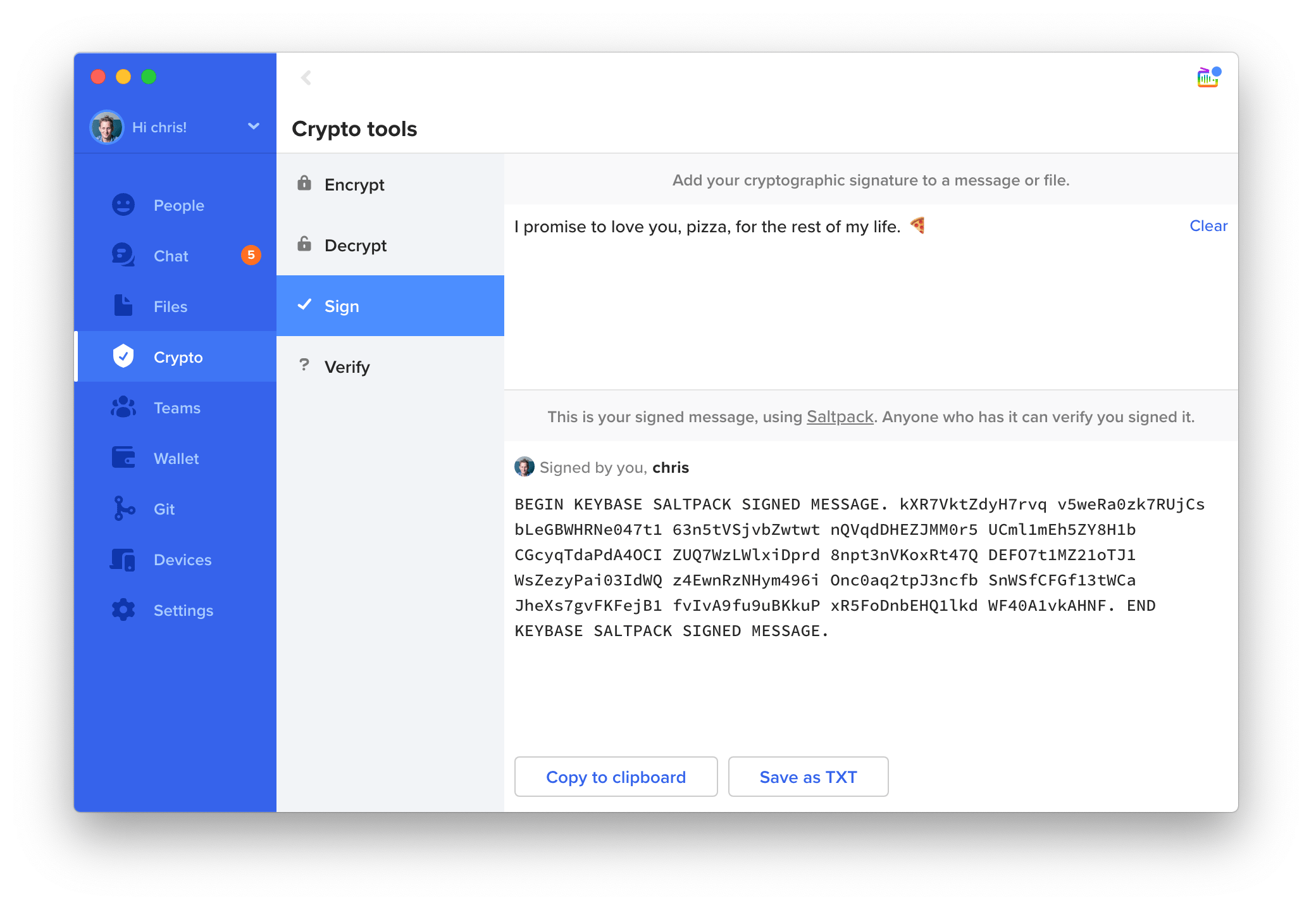 In a few keystrokes, I generated the signed text and copied it to GitHub.

Someone finding my message can check the signature and know it's character-for-character exactly what I signed: 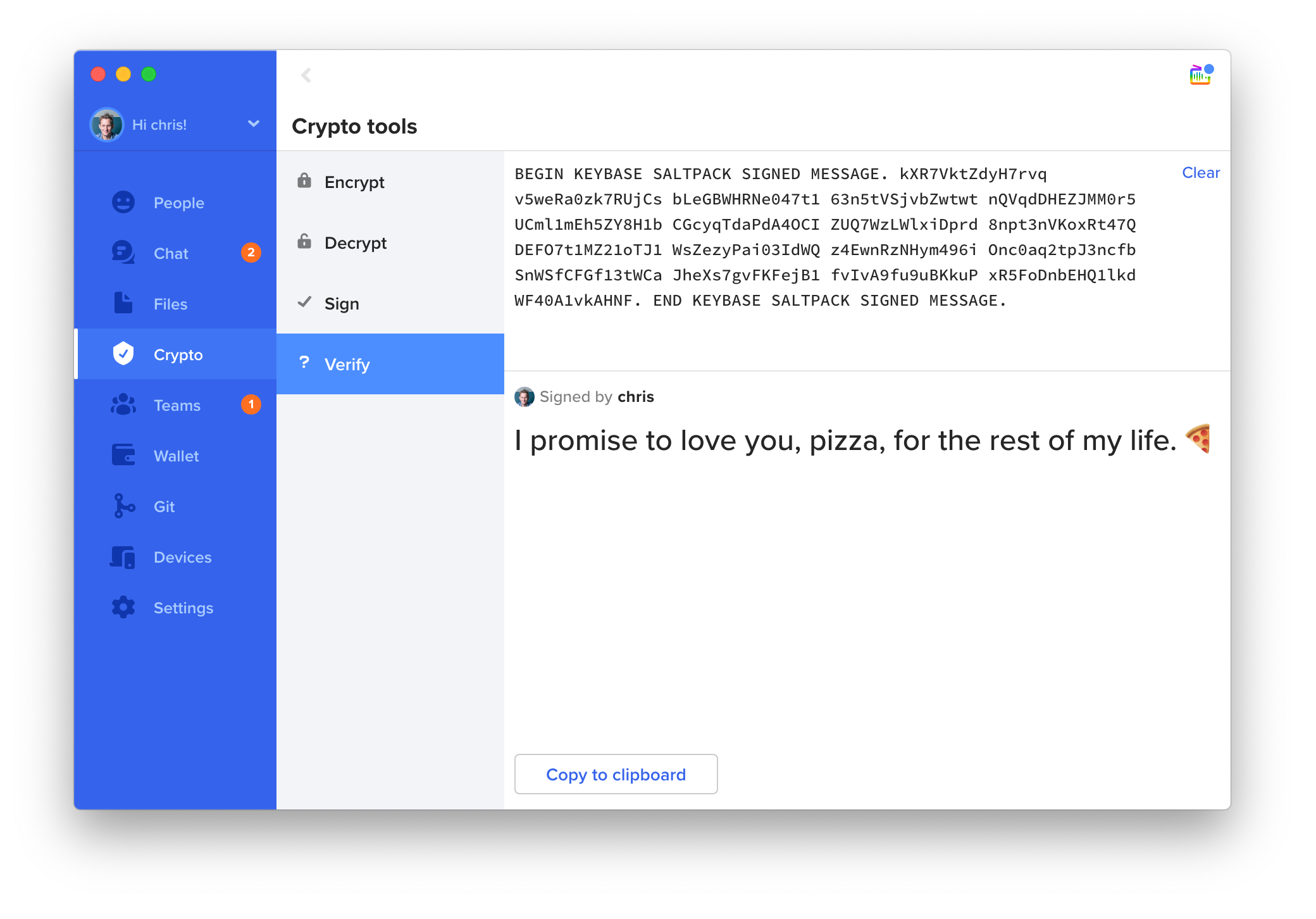 And, if you're unfamiliar with how Keybase works: the reader can tell who I am. I have a long history of owning the Twitter account @malgorithms, the site chriscoyne.com, and so on. This is all verified in the Keybase app without trusting Keybase's horrible, evil servers: 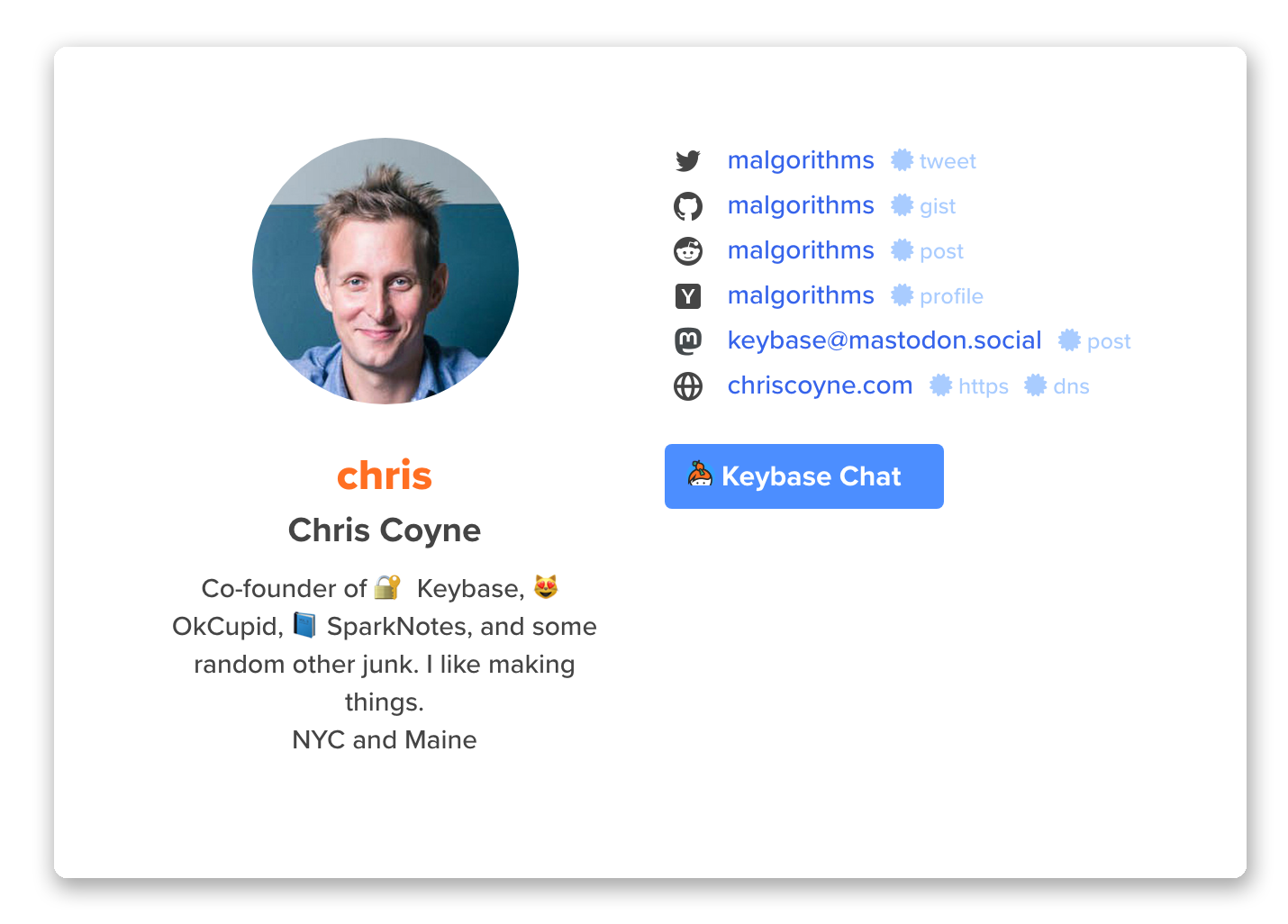 The same goes for encrypting. You can now post encrypted files anywhere you want, even on a public message board or pastebin. 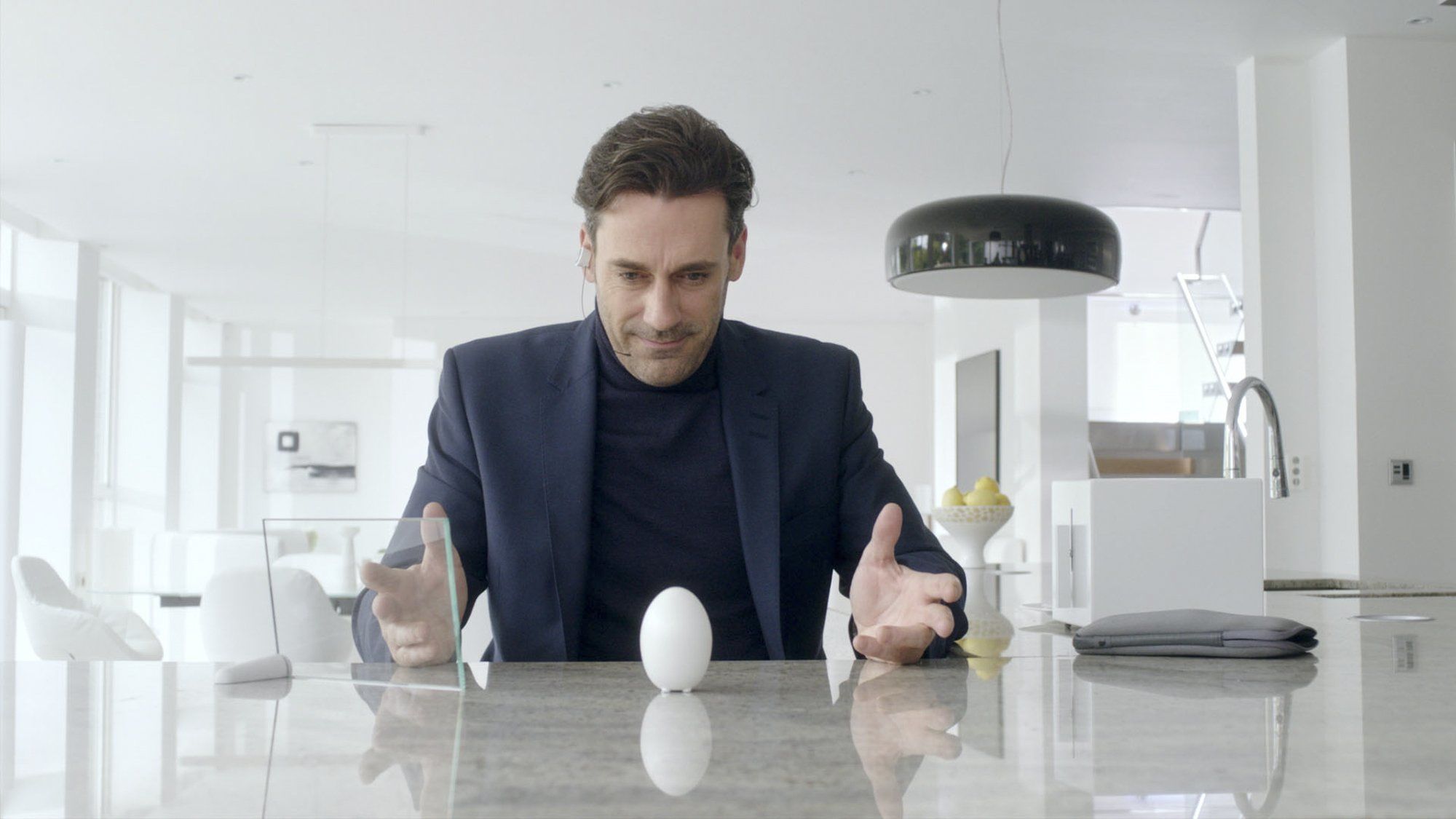 Recall getting a new computer in the olden PGP days. So many confusing details. How do we summon the private key from one device to another? Or shall we make a new key and somehow sign it? How many bits in this new key, we wondered. How high, we asked, must we pin the goat entrails.

With Keybase, you simply bring 2 devices together to provision the new one. Each of your installs gets its own private device key. Your work computer, your home computer, and your phone all have their own keys, which never leave them. They are not backed up to iCloud or Google.

And yet, here's the magic: when you encrypt a file in the Keybase app, it will be available for your—or recipients'—future devices too. The process of adding a device includes a step to ensure this works.

You can safely use Keybase's encryption for backups and similar purposes.

Encrypting for people outside Keybase?!

I just wrote the following message for Twitter user @billieeilish. I simply typed her Twitter handle into the Keybase app and it worked.

a message about phoneutria nigriventer
Despite how public this message is,
it is only readable by me and her.

How is this possible? What sick magic is this? Is it server trust? I mean, clearly she doesn't have keys yet.

You can think about it, and I'll answer it in the FAQ below.

What's with the pizza?

It's the original love triangle

Saltpack (saltpack.org) is a format we published in 2017, being particularly fed up with PGP.

It has a lot of great features for crypto nerds, with none of the complexity or security bugs that have plagued PGP. We also really like how the output looks. You can paste it all over the Web without fear of mangling or bad formatting.

We didn't invent new crypto for it. It's just a combination of existing tools.

Why do you like Keybase's multi-device story so much?

It's safer and easier to understand than PGP. You never need to think about private keys. And on the chat side, it isn't “TOFU” (trust on first use) over and over again, every time someone in your team upgrades their phone.

Anything else you want to say?

The app generates a shared key for you and them. Initially, only you hold this key. You then encrypt a message for this key, and you also sign a statement for yourself, an assertion of who else should be allowed to have access to the key.

In my above example, I've signed for myself a statement that I want Twitter user @billieeilish to have access, and I've asked the Keybase servers to let me know when she joins.

When she someday establishes keys, and cryptographically proves her Twitter account, the Keybase servers will ping my apps and ask for me to make available the decryption key to her. My app will check the signed statement from myself, check her tweet, make sure the proof is valid, and then send the decryption keys to her, encrypted for her device keys.

She decrypts the key, gaining access to the file.

Keybase is not a trusted man-in-the-middle here, and no one else has keys. The only weak link here is Twitter: my assertion is like this, in English: “once someone who owns the @billieeilish Twitter account publicly proves a Keybase connection, I'll unlock it.” If Twitter gives that account to someone else or takes control of it, I'll be trusting Twitter's answer. @billieeilish is not yet a human. She's a Twitter account.

Once she has proven the account, we can chat and I'll no longer be trusting Twitter. At that point, I'll have converted the assertion to a chain of signatures.

Tell me more about the multi-device thing

Saltpack has a native notion of multiple devices, allowing you to decrypt data securely on devices you haven't bought yet. This might sound magical. But it's simple: when you provision a new device with an existing device, the old device securely gossips higher level decryption keys to the new device. As long as you have an uninterrupted chain of devices, you retain the ability to decrypt files and texts encrypted in the past. No more, “can you please resend the encryption? I lost my key.”

Is it available in the phone apps?

Not yet—we're working on it. In a release soon.

Does it work from the command line?

I'd like to do something with Saltpack. Does my project need to talk to Keybase or use Keybase in some way?

No, Saltpack is a general format. We'd love to see its wide adoption.

Yes, still, from the command line.