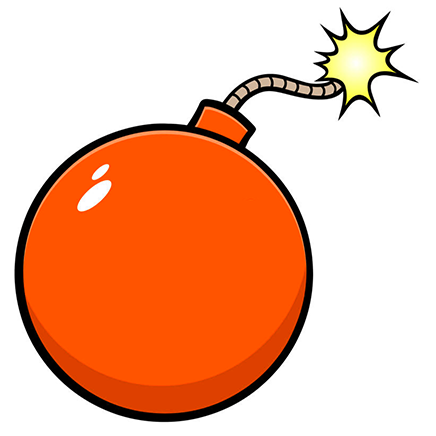 Hi everyone. Starting today, you can put a short fuse on your Keybase chat messages. This works for 1-on-1 chats and also inside team, group, and community channels. 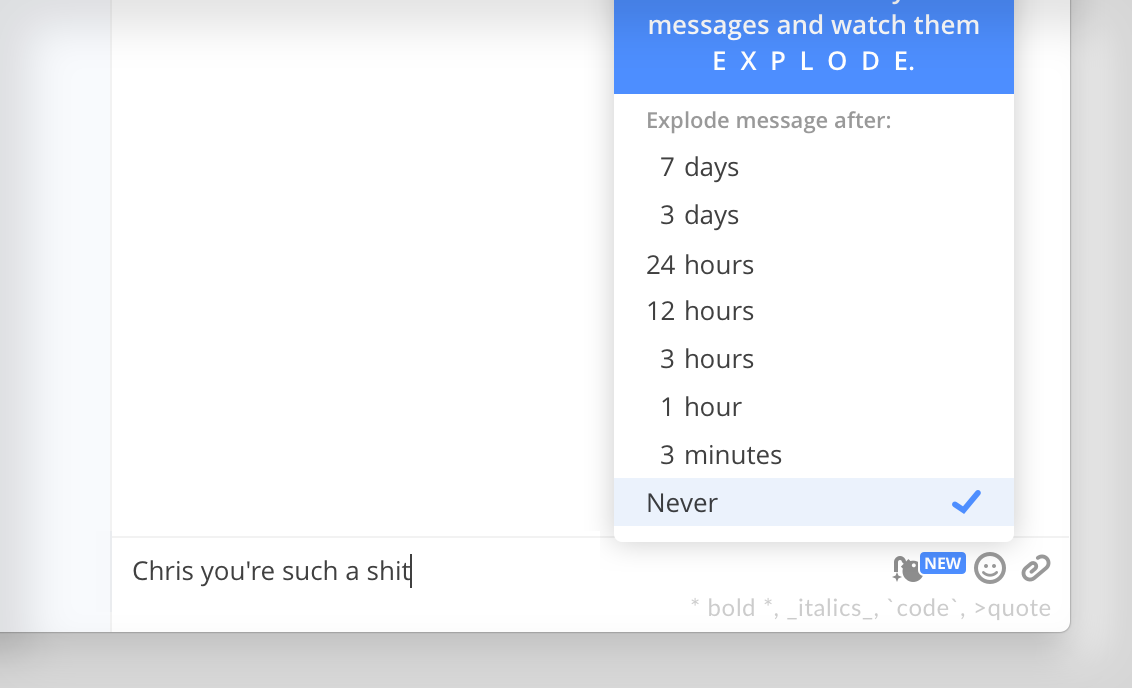 demonstration from my brother

We recommend your most intimate and most corporate messages get the exploding treatment. Each end of the professionalism spectrum. Don't put that dank meme or Income Statement in plaintext, people. Put it in Keybase, so it's encrypted.

And if you'd like it to be temporary, make it explode.

When the time comes, KA-BOOM

When the countdown hits zero, everyone throws away the plaintext and ciphertext.

Forward secrecy means your apps use temporary "ephemeral" keys that are thrown away.

To be clear, all Keybase messages - not just exploding ones - are end-to-end encrypted. No one can read them without compromising one of your devices.

Forward secrecy is something extra. It protects you if someone in the future steals your device's key and also has access to old recorded messages, say by scooping up ciphertexts as a man-in-the-middle.

Forward secrecy works extra well with timed messages because your device destroys both the decryption keys and plaintext.

Splosions from the command line

You can also send exploding messages from your terminal of choice.*

If you're writing a bot, you can pipe JSON to keybase chat api. Example:

You can get more API examples with keybase chat api --help.

Another step forward for Keybase. Cryptography for everyone.

Are there docs on how this works?

Yes, here are the crypto docs. And here's the Keybase source code.

What's the point, if someone can just take a screenshot?

I answered this on Hacker News.

Why don't all messages have forward secrecy?

We've blogged about this before. It's not the right answer for a mainstream chat replacement, because it forces dangerous behavior and/or makes you lose all your group's messages when you update devices.

Still, it's up to you! Now you can have all the forward secrecy you want with Keybase.

Repudiation is launching in ~3 weeks.

So yes, in chats up to 100 people, messages will be pairwise MAC'ed. Pairwise MAC'ing doesn't scale for mega-large community chats, so those messages are still signed & encrypted in the traditional sense. This seems like the best balance.

Some have argued repudiation is a silly feature. After all, who, in the history of humanity, has ever not gotten in trouble for something that leaked, just because it wasn't cryptographically signed?

Anyway, this is minimal overhead with some benefit, so we're doing it.

Does the timer begin when the message is sent or received?

This seems like the only sensible answer for group chats. And we can't have a different answer for 1-on-1 chats and group chats. That would confuse people. Not the kind of person who reads an FAQ such as yourself, of course.

So our answer is simple: you set a timer and the message is gone after that time.

I have nothing to hide

Because no one is trying to hurt you

INSTALL KEYBASE 🌈
This is a post on the Keybase blog.
🌈  Install Keybase
https://keybase.io